In the previous episode of the adventures of Elsabé Kritzinger, the straight laced Afrikaans woman who lives inside of me, I challenged the world to introduce me to other flavors of vanilla in life. The proverbial gauntlet had been laid down and I continued my quiet vanilla life in peace and quiet. Just me and my glass of chardonnay. Until someone accepted the challenge.

It started on a Wednesday with an invitation to a social media group, for people who want to be naughty and share their naughtiness. I thought to myself that this couldn’t hurt. So I played along, chatted with the people – in the interests of science and research of course, I am after all the consummate prude at heart.

It was when I was asked if I was joining the group that Friday night that I turned into Bambi caught in the headlights. I knew then already that this was not an invitation to a book club and that Elsabé was NOT on the guest list.

I decided to go and see what it was all about, at any rate it was better than a Friday night of Dawson’s Creek re-runs. It was then that I received the rules for this get together at a private residence. Rule number one, and I paraphrase, most of our guests are nudists, so upon arrival you will be asked to remove your clothing so that everyone is on the same comfortable level. Rule number two, no derogatory or rude comments about anyone else or you will be asked to leave. Rule number three, bring what you are drinking. And was reminded that I was welcome to stay the night as were all guests.

Now lets just rewind to rule number one, the ultimate Bambi switch, remove my clothing? In front of people? Everyone just calm down. I battle to take my clothing off in the dark by myself so there was no way on this planet that this was going to fly with me.

And yet at 7 pm on Friday evening I found myself showered and dressed, bolla klitsed, and arriving at a normal looking home, known in the group as “HQ”, dosed with calmettes and armed with booze. I still couldn’t tell you why I was there but there I was. I entered a room of around 15 naked people sitting on couches and talking. These were friends, not just random people – a community. Singles, couples, all sorts. I ripped off the plaster, downed a drink and found myself on the sofa in the altogether with my in-between-me-downbelows showing.

Here is the strange part. I made friends. Good people. After a short talk from a guest GP about the benefits of PrEP and everyone receiving literature about the same, the evening carried on with much laughter and sharing. What else happened? You don’t need me to tell you that. You already know. Besides, what happens at HQ stays at HQ.

The experience was out of character for me at the time but I think Elsabé may have been silenced for good. And it all got me thinking – is this the answer? Here was a safe space for people to express certain desires that they felt instead of Grinding and Scruffing. Is stigma going to destroy a community like this or have we evolved? I don’t know. But I know that my Friday nights may not be so dull in future. I have a tribe now.

Craig Stadler is a contributing writer for Anova Health Institute.  These are his views, which may or may not reflect those of Anova and affiliates. Let your voice be heard. If you would like to write for Health4Men or We The Brave contact Bruce on little@anovahealth.co.za 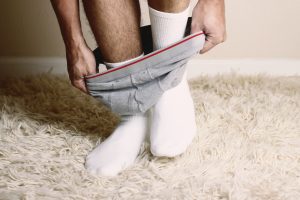